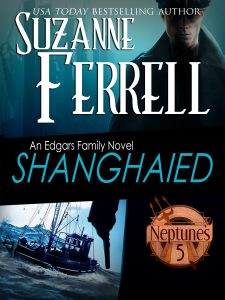 It’s 1941. While Europe is emblazoned in a devastating war, America sits blissfully neutral. An ocean separates them from the conflict, but not everyone believes the states are safe from the Nazi threat.

Zach Edgars, code name Neptune, and his team of undercover ONI operatives are in North Carolina hunting German spies working on American soil. Their only clue is a slip of paper in a dead informant’s pocket that reads, Shanghaied in Wilmington.

Sophie Moore, grew up working in her father’s pub, Shanghaied, situated near the newly built emergency shipyard. She’s used to dodging wayward hands and the occasional drunken brawl, but a newcomer in the dark trench coat and with the swagger of a pirate has her feeling nervous. Despite his involvement with the locals’ less-than legal activity, something about Neptune makes her think there might be more to the man.

When her friend goes missing, Sophie finds herself and her father’s bar thrust in the middle of a dangerous game of cloak and dagger. Can she trust this pirate, or will she and her father lose everything—life, love and liberty?

Review from Books I Love A Latte.